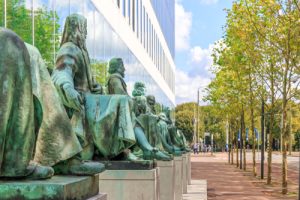 QUESTION: Marty, I just read that in the Dutch so-called climate Justice case the supreme court has upheld the original 2015 ruling, legally requiring the government to reduce emissions by 25%. This appears to be the first successful such case, and it might be a precedent for the others.

What about the separation of powers if the judicial power is used as a political tool to force the hand of the executive power? Wasn’t it rather meant to be a check and balance?

Thanks for what you do.
KR

ANSWER: The judges in the Supreme Court of Netherlands have made one of the worst decisions possible. In hindsight, the ruling will be the straw that broke the back of the European economy. The judges made their decision based solely on the international human rights law. This absurd ruling fails to consider that even if the Netherlands outlawed cars, manufacture, heating of homes, and the production of electricity from anything but wind or hydroelectric, it will not change the climate of the entire planet. The only outcome is to destroy the economy of the Netherlands.

There was no proof presented which established beyond reasonable doubt that there is any connection between CO2 and climate change. Nevertheless, on the 20th of December 2019,  the Dutch Supreme Court upheld the previous decisions in the Urgenda Climate Case, which held that the Dutch government has obligations to urgently and significantly reduce emissions in line with its human rights obligations.

The judges ruled against the Dutch government, which was the first in the world in which citizens established that their government has a legal duty to prevent dangerous climate change. The ruling was based on the fact that the government has established a policy claiming it would target a reduction by 2020 from 1990 levels. The court ruled the government must cut its greenhouse gas emissions by at least 25% by the end of 2020 (compared to 1990 levels). The ruling required the government to immediately take more effective action on climate change, and in the short time span, may seriously disrupt the entire European economy.

The United Nations rejoiced in slapping down the Netherlands government as the UN High Commissioner for Human Rights has also published a news release about the decision in which she notes that “the decision confirms that the Government of the Netherlands and, by implication, other governments have binding legal obligations, based on international human rights law, to undertake strong reductions in emissions of greenhouse gases.”

The question whether the court has abandoned the separation of powers and is engaging in dictatorial powers is an interesting one. The court alluded to a very serious breach of democratic powers of government in confining the judicial role in cases of alleged state negligence. What if someone killed a member of your family. Is the state negligent because it failed to protect your family? The issue of protecting citizens raises the question of whether there is a duty imposed upon government and how can they achieve that protection if it exists.

The court looked at this issue and WRONGLY entered something which can lead to the collapse of the rule of law. Where the issues can be spliced and a minimum standard of protection can be reduced to quantifiable terms such as a percentage reduction. The court viewed it can dive into this question by separating the directive of ordering a reduction in CO2 from HOW that reduction is to be achieved. The court created a fictional Chinese Wall where the HOW is a policy issue not to be decided by courts. This raises the appearance that it is permissible for the courts to establish that standard but not the policy. In doing so, the court WRONGLY assumes it will remain within the correct confines of their judicial role, protecting rights rather than creating policy.

The court was well aware that it was crossing the line separating the judiciary from the legislative. Under a sub-heading entitled, “The Separation of Powers,” the court explained why the decision did not qualify as something beyond its constitutional powers. Under Dutch law, there is no true and complete separation of state powers. Instead, the Dutch system is not a democratic system which most people do not realize. As the court explained, in the Netherlands the judiciary has a “balance” of power rather than a separation of power within the constitution. They argue citizens require legal protection from the state, and created that with the power of adjudicating over those disputes.

The court reasons that the judiciary has “democratic legitimacy,” yet it is not democratically elected. Justices of the Supreme Court are appointed by royal decree, chosen from a list of three, advised by the House of Representatives on the advice of the court itself. The justices are, like every other judge in the Netherlands, appointed for life, until they retire at their own will or after reaching the age of 70. Therefore, despite its reasoning, it is outside any democratic process.

Then the court reasoned it cannot refuse to decide matters within its jurisdiction simply because there may be political ramifications. Interestingly, the fact that the multiplicity of the very nature of the debate over climate change was disregarded by the court and was never fully addressed. The court simply said it did “not have a clear picture of the magnitude and meaning of … [all] consequences,” and there was a need for some restraint in what the court should order.

What is clear is that the judges WANTED to rule most likely because they believe in climate change being humanly induced. There is no other explanation for delivering such an unbalanced decision that has the risk of destroying the economy of Netherlands for it cannot order the climate change be reversed solely upon the actions taken in the Netherlands.

The court rooted its decision, claiming that the state was in breach of its duty of care to Dutch society by failing to take sufficient mitigation measures to prevent dangerous climate change. That argument can be applied to any citizen who is harmed even by being raped by a refugee or robbed on the street at gun point. Granted, up until 2010, the government had a national target for reducing emissions by 30% by 2020 compared to 1990 levels. The government continually ascribed to make reductions of 25-40% by 2020. The reductions were only 17%, which was used as evidence showing that the government had previously agreed to this 25%-40% reduction. Therefore, the case DID NOT settle the question that climate change was actually caused by humans.

The government did not even try to argue that the scientific consensus had changed or that climate change was not proven to be caused by CO2. They government’s argument was  or that the original target was economically impossible. Indeed, a reduction of 25% by the end of 2020 will destroy the economy and cause unemployment to rise. That argument did not matter to the judges. Therefore, they did engage in a usurpation of dictatorial power.

Therefore, this decision in the Netherlands is not likely to prevail in most other jurisdictions. There is certainly no basis for this to be even made in the United States. This merely appears to be another nail in the coffin of the dying European economy.