Justin Trudeau was hoping the war in Ukraine would distract Canadians from the war he inflicted domestically upon his own people. Trudeau enacted the Emergencies Powers for the first time in history in order to behave like a dictator to silence free speech. Anyone who still believes he is a man of the people needs a brain scan. Trudeau does not have a leg to stand on to condemn Putin when he too jailed the opposition, journalists, and anyone who supported their plight. He showed his inability to behave like a leader by hiding from the protestors and implementing the harshest penalties by law instead of facing them like a man. 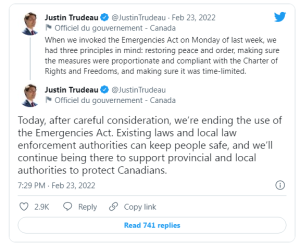 It is no wonder that nearly half of Canadians (47%) now have a worse impression of Trudeau, according to a Nanos Research survey. His image as the young empathetic leader has shattered – mask off. A separate survey by Angus Reid Institute found that 65% of Canadians polled believe Trudeau’s response worsened the already tense situation between the government and Freedom Convoy protestors.

Trudeau embarrassed Canada on the international stage, with numerous world leaders condemning his actions that were the definition of hypocrisy. He upset his own Parliament and insisted that anyone who disagreed with him was a Nazi sympathizer. The prime minister thought it was simply a “fringe minority” who opposed government mandates. He assumed he could easily impose the will of Schwab on the people to begin the Great Reset. The protest may have ended after three weeks, but the long-term effect the truckers have had on Trudeau’s image is seared in the minds of Canadians.