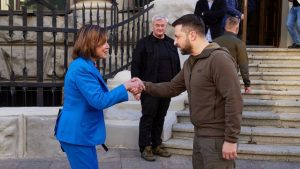 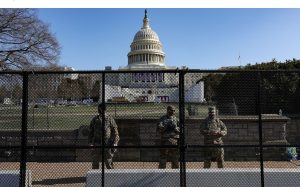 Politicians are using Ukraine as a photo opportunity. Would the most powerful government officials risk traveling there if Kyiv was under constant attack? Would they publicly stroll the streets in Russia’s alleged top target? Third in line to lead the US, 82-year-old Nancy Pelosi, insisted on putting a wall and armed guards around the US capitol, stating she feared for her life. She had no problem flying to what has been described as an active warzone to take pictures with Zelensky and personally deliver him billions of dollars for a war the media states he is winning. What she actually did was commit the United States to a direct war with Russia and the goal is their destruction not to defend Ukraine. They outright said before the world, that there are no peace negotiations, this is a defacto Declaration of War. Boris Johnson also did not pass on the photo opportunity. The prime minister of the UK openly walked around Kyiv with the Ukrainian leader. Zelensky made sure to wear his military gear for the photos, although Johnson was in a suit. There were no bulletproof vests, and they did not meet in a secret location. In fact, numerous leaders of NATO nations have visited Ukraine since the war began. The presidents of Lithuania, Latvia, Poland, and Estonia all traveled by train to visit the war-torn country. Many others have visited as well and sent top delegates amid an ongoing war.

Everyone clearly knows where Zelensky is located – including the Russians. There were countless reports of Russian special forces attempting to assassinate Zelensky in the “early hours” of the war. Sources claim that was propaganda. Zelensky never went into hiding. He posts videos from his office in Kyiv and has made his location known. Yet, he claims that he and his family will be assassinated by Putin soon. He has successfully secured the public’s opinion as they see him as a brave leader who is willing to risk his life for his country. If Putin wanted to assassinate Zelensky, he would have done so already. Putin does not want a war with NATO and is moving carefully. However, the West wants war and desperately needs war as stage TWO of the Great Reset for the days of Keynesian Economics are coming to an end. The West has been borrowing relentless since World War II with no intention of paying anything back. The ECB lowered interest rates to NEGATIVE in 2014, and now the entire European pension system is bankrupt. They need this war to blame the collapse of government on Putin as well.

The post Propaganda From a Warzone first appeared on Armstrong Economics.