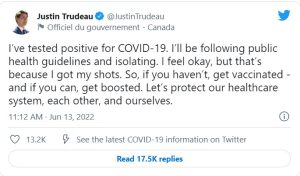 Justin Trudeau contracted COVID for the second time this year. He is using his new diagnosis as a marketing campaign for Canadians to become human pushpin cushions. So he allegedly took numerous shots and boosters and still contracted the rarely deadly virus.

According to the Oxford dictionary, delusion is “characterized by or holding idiosyncratic beliefs or impressions that are contradicted by reality or rational argument, typically as a symptom of mental disorder.” The prime minister is now eligible for his own epigenetics program whenever Schwab decides to discard him.

I should also mention that Trudeau met with high-risk 79-year-old President Joe Biden on Thursday. He met with 82-year-old Nancy Pelosi on Friday, and they were photographed together without their favorite publicity accessory (masks). Neither has plans to isolate after coming into contact with the prime minister. Yet another example of politicians clearly knowing that the rules they impose are complete nonsense.